There is not a single one. To begin, since the concept of nationality was very different in Biblical times than what we know as nations today, we are dealing only with questions of race, ethnicity, and skin color. This discussion started after a Facebook post was shared saying, “There are no white people in the Bible. Take as much time as you need with that.” A question arose: “Pontius Pilate? The Philistines?”

We will examine Pontius Pilate. Then we will answer the second question, as well as the topic question of this blog, by looking at questions such as what are “white people” and when exactly did this term originate? 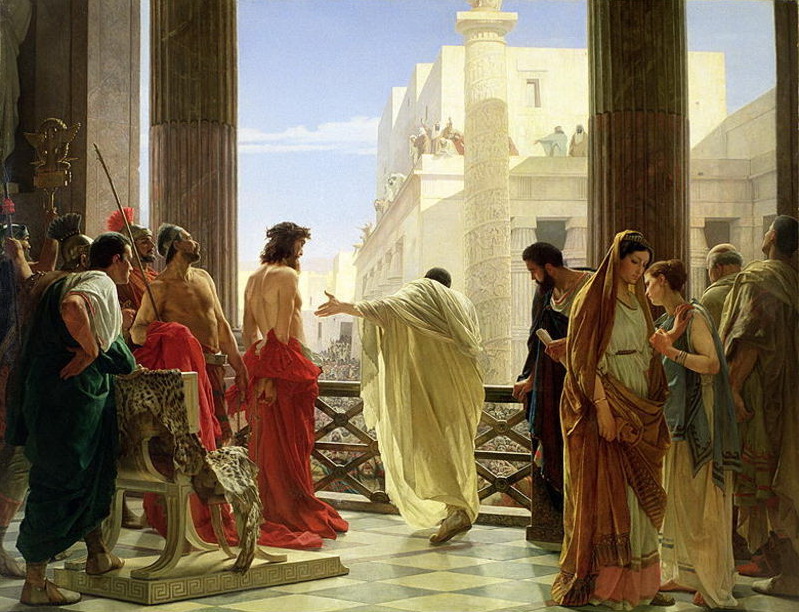 First, according to Britannica, Pilate was a Roman equestrian (knight) of the Samnite clan of the Pontii (hence his name Pontius). A Samnite is a member of the ancient warlike tribes inhabiting the mountainous center of southern Italy. These tribes, who spoke Oscan and were probably an offshoot of the Sabini, apparently referred to themselves not as Samnite but by the Oscan form of the word, which appears in Latin as Sabine.

The genetic basis of a number of physical features of the proto-Indo-European people were ascertained by the ancient DNA studies conducted by Haak et al.  (2015), Wilde et al. (2014) and Mathieson et al. (2015): they were genetically tall (phenotypic height is determined by both genetics and environmental factors), overwhelmingly dark-eyed (brown), dark-haired and had a skin color that was darker than that of the average modern European.

In answering the question about the Phillistines, we can begin by deconstructing race. The term race is often used to classify people based almost solely on physical characteristics. According to evolutionary ideas, these “races” descended from different ancestors separated by location and time. However, if biblical history is used as a basis, the concept of multiple races dissolves. We are all one race (“one blood” in Acts 17:26).

Modern anthropologists and other scientists recognize the reality of biological variation between different human populations. However, they regard the concept of a unified, distinguishable “white race” as socially constructed. It is a group with several different potential boundaries. And there is no accepted standard for determining the geographic barrier between white and non-white people. Thus, it is at best a flawed concept.

So then, what are “white people?”

The term “white people” is a racial classification specifier. It is mostly used exclusively for people of European descent; depending on context, nationality, and point of view.

The usage of “white people” or a “white race” for a large group of mainly or exclusively European populations, is defined by their light skin, among other physical characteristics. It contrasts with “black people”, Amerindians, and other “colored” people or “persons of color.”

Far past biblical times, the concept originated in the 17th century. It wasn’t until the 19th century that this vague category was transformed in a quasi-scientific system of race and skin color relations.

Therefore, there could not have been any white people in the Bible.